As Dallas grew, members of First Presbyterian Church saw the need for a second Presbyterian church in the city.  At an 1891 Presbytery meeting in Colorado City, Texas, delegates asked for a commission to consider establishment of a new church to serve the rapidly expanding residential district in far north Dallas—which is now the heart of the city.

Dr. A.P. Smith, pastor of First Presbyterian Church, served as Chairman of the commission. Other members included: W.L. Lowrence, City Evangelist; James D. McLean, Presbytery Evangelist; and ruling elders from First Presbyterian. As suggested by its new minister, Dr. McLean, the church was named Westminster Presbyterian Church. The organizational meeting was held March 13, 1892 and the charter listed seventeen members. The next Sunday, three new members were received into the congregation.

Early Years
The city of Dallas grew and so did WPC: fifty members by the end of the first year, and 144 members by March 1898. Dr. McLean resigned in 1894 to be succeeded by another state supply pastor, Dr. Walter C. Roe. Dr. Roe served until 1897 when he left to do mission work among the Indian tribes of Oklahoma. Dr. Robert Hill became the next stated supply and was installed as the first installed minister in 1898. He served until July 1915—the longest tenure of any of the eighteen senior ministers in the history of the church to date.

Initially the church was built on leased land at the corner of Phelps and Thomas streets. Two years later, another lot was purchased at 2118 Thomas Street and a larger frame building was erected. Several years later, this frame building was moved to the corner of McKinney and Fairmont and enlarged. The congregation pledged $16,175 toward the first phase of the construction. When pledges fell short, members signed personal notes to complete the construction. More money was borrowed to complete the sanctuary, and, by 1923, all notes were paid. 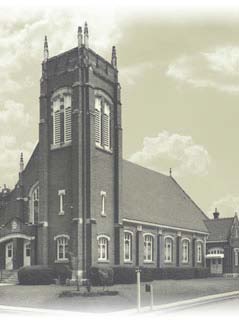 Move to Devonshire
In 1942, 528 members celebrated WPC’s 50th anniversary. The only living member of the original founding congregation was there for the celebration.

World War II ended and Dallas was growing, once again to the North. The decision was made to move the church farther north, resulting in the purchase of four acres at Devonshire and Purdue for $15,600. For nine years, WPC carried out all activities in a frame building and pre-fabs, described later by Rev. Robert Stewart as “GI Gothic” 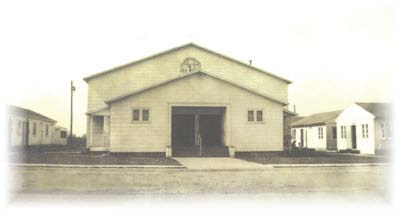 On April 25, 1954, ground was broken and on February 6, 1955, the cornerstone was laid for a Georgian-style structure with graceful columns and portico.  When the new building was completed in September of 1955, it had plenty of room for its 637 members. Dr. Walter A. Bennett, having just become the new minister, officiated at the dedication of the building and served WPC until 1968 when he left to serve St. Charles Presbyterian in New Orleans. His tenure became the second longest in Westminster history.

In 1957, Fellowship Hall was added to the north end of the property and served as a gym with a stage. That year we reached our peak in membership of 802.

In 1967, the church’s Mother’s Day Out program became the beginnings of the Westminster Presbyterian Church Preschool and Kindergarten, as a mission of our church. Also in 1967, WPC marked its 75th anniversary (with 700 members) by playing host for the first time in its history to the annual meeting of the Synod of the Sun.

Historically Westminster has had a strong commitment to Christian Education. As you mentioned earlier we had several adult classes. We have been fortunate to have had very good teachers and members with seminary training such as Dick Powers, George Gee and Chris Harper. The bedrock of the church, of course, was its ongoing ministry in the name of Jesus Christ.  Plus its efforts to help alleviate the terrible problem of hunger and homelessness in Dallas.  WPC has always done its duty in the mission world and we have had many driven leaders chairing the Mission Committee. WPC supported Missionary Alva Hardie, who went to Brazil in 1912. We  provided the entire support for Beth Edwards, who served as missionary to the Congo beginning in 1926….and the Bill Jennings family in South America…the Clarence Bassett family in Mexico, and the missionary work in Bangladesh of Scott and Melanie Smith, he a child raised in this church.

Westminster also has a history of working with other churches. From 2009 to 2015, members from Westminster and Emmanuel Presbyterian Church in Bedford partnered together annually on mission trips each summer to the Beaumont/Port Arthur area to repair hurricane damaged homes.  We have also partnered with Greater Zion Missionary Baptist Church located close to Love Field in feeding the homeless.

Our Last Fifty Years
The Morrison Chapel was dedicated in 1971 (having been built in 1955) after it was furnished by the family as a memorial to the late John L Morrison Sr.

In the seventies, we had a baseball field at the back of the property and a men’s softball team with 22 members, which ended the 1974 season with 14 wins and 5 losses.  There was also a boys basketball team for grades 10-12. Fifty members volunteered to deliver food for Meals on Wheels during the month of April. There were eight Women’s Circles with 25-50 members in each, one meeting at night to meet the needs of the working women of the church.  There were seven children’s Sunday School classes and eight Adult classes with worship at 8:30 and 11:00. The Session was composed of eleven committees and the Board of Deacon, six.

In 1973, Senior Minister Robert J. Stewart, 44, collapsed while walking to his car in the church parking lot. Upon arrival at Parkland, he was pronounced dead of an apparent heart attack.  He had served WPC since 1968. Four months later, our Fellowship Hall was formally dedicated in his loving memory. Our Associate Pastor, Rev. Richard C. Powers took over in his stead until a new senior minister, Dr. Robert Leslie, was called in 1974. Afterwards, Rev. Powers left to take a sabbatical for rest and a period of study. It was during this time that plans were drawn to build a new educational wing, eliminating finally the unsightly “GI Gothic” outbuildings. When Robert Leslie resigned in 1981 to become senior minister at First Church in Bryan, Dr. Walter Bennett, by then retired, came back to serve as our interim minister until a new minister was selected.  The congregation in 1984 honored Dr. Bennett with the designation of Pastor Emeritus and he and Deedy attended our church faithfully until the end of their lives.

Dr. Charles Taylor became Westminster’s 14th senior pastor on July 1, 1982 (membership = 567). He arrived just in time for the groundbreaking ceremony for the new educational wing. The building was completed in 1983 at a cost of nearly $1 million but there was no debt encumbered. The congregation had already underwritten the new building fund before the last brick was laid. In 1985 the Session merged the work of the Board of Deacons with the work of the Session. The unicameral plan called for the expansion of the session from 18 to 24 members serving on seven committees. That year, we also joined North Dallas Shared Ministries.

Dr. Taylor had continued to make music a integral part of the worship service. The choir was growing in numbers but the aged organ was playing out.  So a fund was established and soon adequate money was available to replace the old organ. Robert L. Sipe was engaged to build a $160,000 organ. The design called for displaying many of the organ pipes, and thus the lighted Celtic cross had to be taken down. The new organ was completed in 1988.

In 1992, we celebrated our first one hundred year history with 615 members. We experienced some of the problems of inner-city churches— younger members had moved to the suburbs and number of children had dwindled seriously. In 1997, Dr. Taylor was encouraged to resign because of family problems. Dr. Taylor’s departure cause a large split in the church with many families choosing to leave and an EOY membership of 432.

Dr. Ron Salfen served the church as our installed minister from 1999-2005. He taught a very well attended Disciples I and II Bible Study class every week for two years. Boy Scout Troop #35 began meeting in Fellowship Hall in the 2000’s

Dr. Salfen resigned to join First Presbyterian, Terrell.  There had been a cleaning of the rolls and a decrease in membership (from 375 to 236) during his six year tenure.

Rev. Karl Schwartz came to us from a church in Kerrville in 2007 (membership = 232) with his wife and young family. In 2014 (membership = 209), after an extended leave of absence, Karl was encouraged to resign out of concern for his health.  Thankfully, he was able to reenter the ministry a few years later.

Today and Tomorrow
The church has a proud record of benevolent giving and is renowned for its warmth and friendliness. In first part of the 21st Century, our preschool was attracting young couples and the neighborhood was changing once more. Strollers and tricycles were again seen along Devonshire. And WPC had geared up with a strong program to meet the challenge of new members: multiple Sunday School classes, Dinners for 8, VBS, Wednesday night dinners before choir practice and Bible study. We had a Chancel choir, a Children’s choir and a Bell choir.

We established a Community Garden and a neighborhood dog park. We had three potluck dinners a year, held an annual cookie Christmas party at Grace Presbyterian Village, had an all church Christmas dinner with a Christmas play, home bound communion, served Breakfast at the Bridge, Session Retreats, Children’s Time during the Worship Service, and even a talent show.

Coming to us from Preston Hollow Presbyterian, Rev. Nicole Bates was hired in 2015 as a Designated pastor (membership = 171) as the Presbytery felt we needed a period of discernment. In 2015, the Boy Scouts created a labyrinth for meditation on the south front lawn and the next year the preschool built a playscape for its students. In 2017, we celebrated our 125th anniversary with the theme of Rooted in Love and a celebration luncheon with former members and ministers in attendance. At this time, we had one Sunday School class, a Women’s Bible study, a knitting group, a book club, a Session of nine elders, and many hands-on mission projects, and a full time staff of two: our minister and preschool director with part-time staff including: music director, administrative assistant, bookkeeper, and four cantors. Rev. Bates made major strides in attracting young families, getting us organized, updating our manuals, obtaining current technology in the offices and the sanctuary, initiating the remodeling of our parlor, and building a strong bond with our preschool staff.

In 2019, Nicole left us to fill the pulpit of NorthPark Presbyterian in Dallas. In July 2019, Alex Lee-Cornell responded to our call for an Interim minister and our own Deanna Hollas was installed as a first ever Minister Against Gun Violence.

In his first months with us, Alex initiated DriveBy Ash Wednesday, Dinners for 8, and 4th Sunday Family Sunday School.

In March 2020, our church closed for the first time in its history due to COVID restrictions but quickly regrouped and began broadcasting online on Facebook and our meetings (Sunday School, noon day prayer, and Session) were held through Zoom. With warm weather, we began a new tradition of Worship Under the Oaks—outdoor services once a month, wearing masks and social distancing. One year later, we were able to safely resume holding worship services indoors—albeit also masked and social distanced. PreCovid, we also physically and/or financially supported: Austin Street, the Bridge, PCHAS, Stew Pot, Meals on Wheels and Drive-by Breakfast Tuesday Tacos.  During Covid, we added CitySquare, neighborhood food and clothing drives.

And then came the flood……

Today, as WPC strives to serve its neighborhood, the city, and the world, our membership (currently at 150) has declined by one hundred members each of the last five decades—as have most churches in our country.  However, we are energized by a feeling of obligation to those who came before us to show God’s love for as long and as well as we are able.